Focinator is an open-source software tool providing automated analysis of foci images including foci counting and colocalization of foci.

Try Focinator v2-40beta and let us know how you like it!

Colocalization in two directions; your own channel names; Noise, cutoff, area, etc. values in the report file of your foci counting run.

Including new full automatic 4-channel analysis with up to 3 foci channel, new graphical user interface and colocalization! Try the new version now and help us developing the Focinator v2.

Please follow us on ResearchGate for latest news and patch notes!
researchgate.net/project/The-Focinator

Dear user of the Focinator,
We are pleased that the Focinator has awaken so much interest and is now used by many groups around the world. We would be very grateful if you could cite us in return:

The Focinator v2 is based on an ImageJ macro and an R script. To provide easy, user friendly image handling we use the Bio-Formats ImageJ plugin to guarantee, that most of the different image types will run with the Focinator v2. The latest version of the Focinator (v2-31) is now available on the download page. Follow the instructions to install and launch the Focinator. The Focinator v2 opens now automatically all images in a selected folder set and analyses all multi-channel foci images, identify the nuclei and measure their parameters. In the next step the Focinator v2 uses the marked nuclei as "Regions Of Interest" (ROIs) and evaluates the foci in one, two or three foci channel at the same time. Refer to the manual to learn using the Focinator v2.

The new interface of the Focinator v2: 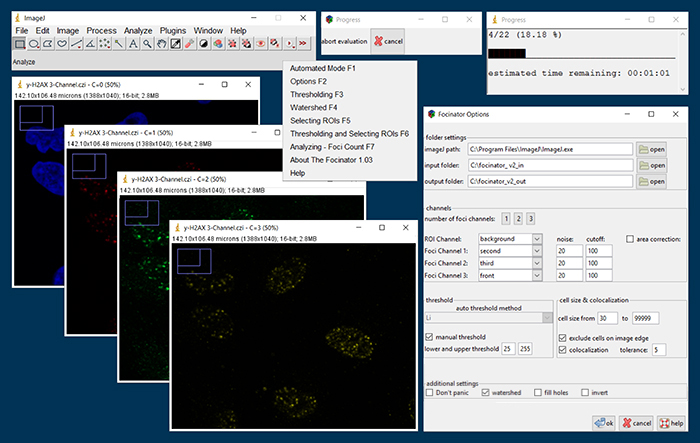